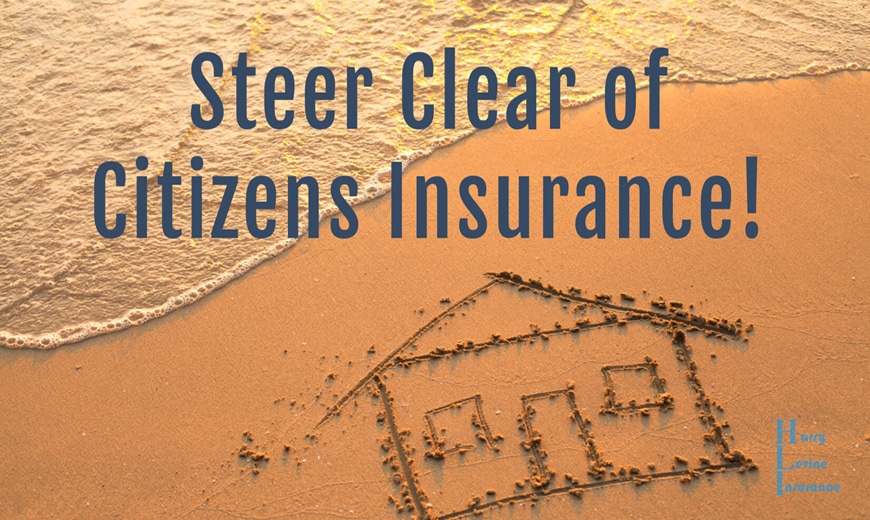 It’s not worth the low premiums!

The last few years have seen insurance premiums increasing at an alarming rate. Throw in unemployment caused by a global pandemic, and it’s no wonder many households are at a financial breaking point.

As a result, many homeowners are turning to the marketplace to seek out cheaper insurance coverage. In some cases, the cheapest option is a policy with Citizens Property Insurance.

But is Citizens Insurance a good choice for you? At Harry Levine Insurance, we caution our clients to never purchase a policy from Citizens if they don’t absolutely have to. In this article, we’ll give our three biggest reasons why and what you can do to find homeowners insurance that fits your budget.

What Is Citizens Property Insurance?

You may only purchase a Citizens Insurance policy if:

Because of these reasons, Citizens is known as Florida’s “insurer of last resort.”

Typically, Florida property owners don’t turn to Citizens because they want to, but because they have no other choice.

What’s even worse is that there are some agents who steer customers toward Citizens simply because they don’t have access to the right insurance company.

For instance, they might be a “captive” agent, meaning they can only offer policies from a single company. Others might work with more carriers, but still have very limited options at their disposal.

Because the average Florida resident doesn’t know this, they go with Citizens and end up regretting it.

Because Citizens is ultimately a government entity, it does not have to worry about its financial health like a private company would. In fact, it’s a nonprofit organization.

While this keeps premiums low initially, it comes at a very high cost later (literally and figuratively):

And what coverage it does have comes with extremely low limits. For example, jewelry and electronics come with a mere $1,000 coverage limit.

Even policies that Citizen offers as endorsements carry a much lower limit than similar policies in the private insurance market. A mold endorsement is limited to $10,000, while you can find limits as high as $50,000 with other carriers.

Reason #2: Low Rates Are No Guarantee

With such low premiums and high-risk properties, how does Citizens Property Insurance have enough in the pool to reimburse all the claims they must have?

Whenever an insurance company has to pay out more than it brought in, they need to make a few adjustments to correct the course. This often means increasing premiums when you renew your policy.

However, if Citizens can’t afford to cover all claims, they can levy an assessment (up to 45% of your premium) on all policyholders.

If you switched to Citizens Insurance hoping to save money, this will likely come as a huge shock. In some households, it might even be impossible to pay the higher rate. But not paying your insurance assessment is a lot like not paying your utility bill. If you can’t pay, Citizens cancels your policy and your credit rate drops.

Once that happens, you’re left with the choice to pay out the nose for your premiums or go without insurance coverage.

Further, if the assessment on Citizens policyholders still isn’t enough to cover their losses, they are legally allowed to issue assessments on private market policyholders. Yup…every Florida insurance customer is susceptible to a Citizens assessment.

Sure, your premiums may be low initially, but it’s likely they will skyrocket as soon as the next hurricane comes through. In a state with so many severe storms—hurricanes and summer thunderstorms alike—is Citizens Insurance really a savings?

Reason #3: Not Everyone Is Eligible

When it comes to determining your premiums, insurance carriers don’t care about your income or how many bills you have to pay. But they do factor in the value of your residence and personal property.

Even if you can’t afford to purchase private insurance coverage, you may have to if those things are worth a certain amount. If the total value of your dwelling and your personal belongings is more than $700,000 (or $1 million in Miami-Dade and Monroe counties), you are not eligible for Citizens insurance coverage.

If no other insurance company will issue you a policy, Citizens is certainly better than having no coverage at all.

But if you’re just hoping to save a few bucks in a harsh insurance market, we urge you to reconsider.

On their website, Citizens even admits that private insurers offer “more coverage options and less restrictive coverage than can be purchased from Citizens.” In a recent article in Insurance Journal, Citizens CEO and President Barry Gilway even stated that it was “unfortunate” that Citizens was becoming the first or only choice for some Florida homeowners.

When the President of your insurance company wishes he didn’t have to write you a policy, that should tell you something.

Even if a private market carrier costs you more per month, you’ll have better insurance coverage, more flexibility, and higher satisfaction than a Citizens insurance policy.

Not sure where to turn? An independent insurance agent is your best choice when shopping for insurance. Because they work with multiple insurers, they have access to more options, so you can find the best coverage for your budget.

And if Citizens is really the best (or only) option for you, they’ll tell you.

We’ve been one of Orlando’s top independent insurance agents for more than 30 years and our staff have the knowledge, expertise, and resources to find the best coverage for your budget.

If another agent told you that Citizens was your only option, you deserve a second look. As a Harry Levine client, you can rest assured that you will never receive less-than-adequate coverage. We only offer policies that we know and trust.

Plus, we’ll offer you a selection of insurance quotes from multiple carriers and take the time to discuss your options so you can be sure that you’re getting the biggest bang for your buck.

Call today or fill out our online quote form to get started.